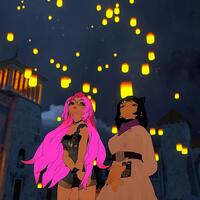 The metaverse is coming. But before we get to that future dystopia, let it be Neal Stephenson’s Snowfall or Zuck’s cringey-what-have-you, there’s this lovely little coffee stop along the way.

Joe Hunting We met in virtual reality is a surprisingly sophisticated documentary filmed entirely inside the VRChat platform at the start of the COVID-19 pandemic. The film follows a handful of isolated VR users and lonely souls from around the world as they find community, companionship and bridal courtship.

There’s Jenny, who teaches American Sign Language (ASL) to anyone attending her virtual classroom. She lectures in short denim overalls, flowing pink hair and tall striped boots, sometimes with a black tie. She comes across as a cartoon fantasy, doing some seriously useful work, and seems like a kind, genuine soul. She is one of the most grounded avatars. Many of its students, and the two romantic couples the film also follows, look like a cross between World of Warcraft and the Furry community. A guy is just a hot dog. Another is a riff on Joe Dante’s gimmick the mogwai Gremlins. Queues abound.

It’s no surprise, and yet the ability to teach something as nuanced and visual as sign, and several different sign languages ​​beyond ASL, is for this aging GenX, well, quite amazing. Remember when Bart Simpson wanted to do “the dishes” because it was in VR? I do it. Here we are.

Most impressive is Hunting’s ability to plant a “camera” in these environments and deliver his narrative (in the typical documentary format of the talking head and significant events) in a way as instantly recognizable and nuanced as the Last 100. and more. years of cinema. He has made several short films this way, but this is his first feature film. Confidence and grace are very present. Apparently, he also appears in the environment as a young man in an orange shirt with a Leica camera during filming. Nice.

His establishing shots in the environments look authentic, even with some rendering limitations, as does the occasional focus, panning, or rack tracking. Familiarity is a nice crutch until this kind of cinema evolves in its own language. Having seen several VR shorts at festivals over the years and having occasionally played the game mod on a Sony or Oculus platform, I was nonetheless amazed at the interaction of the characters and the filmmaker.

It’s not just sign language, but also body language. There’s a natural sense of “noodles,” of exploratory play that comes through, not so much from the filmmaking, which is disciplined, but from the people themselves interacting with each other in a casual, intimate way.

During the film, we also meet Dustbunny and Toaster, who have an ongoing relationship in virtual reality. He attends her belly dancing lessons in the middle of the desert or, perhaps, in a Victorian velvet nightclub. They practice post-covid dating using an airport and airplane environment. The interaction of their virtual selves feels natural and nuanced; body language is both nuanced and spontaneous. She casually lounges on his lap at one point. Maybe I shouldn’t be surprised, but I was.

There is a scene, the opening scene of the film, in fact, where many characters practice driving a car in the virtual environment, like playing a game in a simulation. The result is charming, low-stakes mayhem, even when the vehicle goes off-road or into the side of a mountain. It’s very energetic and fun, without losing the way people shared their experiences together; how it works socially. It made me smile, like a lot of this movie.

Obviously, there are toxic elements on VRChat. it’s still the Internet, even though it’s the beta phase of Web 3.0. Huntington instead focuses on the utopian and emotionally resonant connections of communities as they form and dissolve.

And relationships are taken to the next level, like in the virtual wedding in the middle of IsYourBoi and DragonHeart’s movie. She lives in the UK and he lives in Miami. They each used VRChat originally as a dating platform, when they weren’t working at their real jobs.

For a year, they have been heading for marriage. They play billiards at some point. Although a bit clunky visually, the game has real stakes between the two as they flirt. It mirrors real-world interaction as easily as a 2-meter-tall red-eyed devil plays against a petite dancer in a garter and stockings.

We know, or at least we strongly suspect from history, that these technological trinkets will rush down the drains of abuse, crime, and the darker side of human nature. From computer BBS in the 1980s to ICQ in the 1990s to ChatRoulette in the early 2000s, it has always been that way.

But VRChat, launched in 2017, is still in its infancy, and the brilliance of innocence with virtual reality 2.0 (let’s all collectively forget about the big headache-inducing pixels of Jaron Lanier’s incarnation in the 1990s) has not yet been completely tarnished, like social maturation. Media platforms that have undermined democracy, common decency and dignity.

The Hunt and its cast of characters are currently going through a happier emotional roller coaster. The optimism of We met in virtual reality is absorbing and contagious. For all its cutting-edge technology and murky event horizon, the film is an authentic feel-good movie of our current pandemic moment.

We met in virtual reality