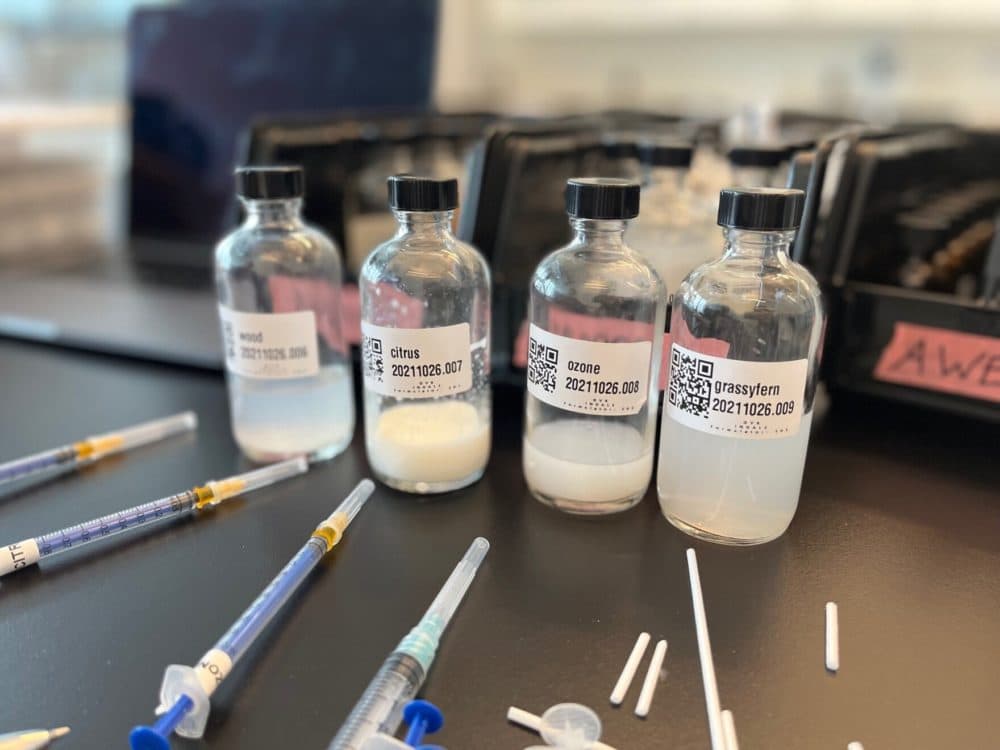 The virtual reality market is booming. Put on a VR headset and you can play a video game, host a business meeting, or even do a guided meditation, all while exploring what feels like a three-dimensional virtual space.

Now, thanks to a Burlington, Vermont-based tech startup, you can smell too.

OVR Technology is one of the few companies developing scent technology for virtual reality.

“What we wanted to do was, as accurately as possible, recreate the way we smell in the real world in the virtual world,” said Andrew Wisniewski, CEO and co-founder of OVR.

At the company’s headquarters in Hula in Burlington’s South End, Wisniewski held his company’s signature device in the palm of his hand: a black cartridge that snaps onto a VR headset and fits over the nose. . Inside the cartridge are perfume bottles made in the OVR laboratory.

Users testing the device can try out demos like picking and smelling a virtual rose. When you remove the rose, the smell disappears instantly instead of lingering as a perfume. This effect is due to the OVR hardware.

At first, it sounds a bit like a modern Smell-o-Vision, Hollywood’s attempt in the late 1950s and early 1960s to incorporate scents into movies. A machine would pump odors into movie theaters matching the on-screen action, such as the smell of gun smoke during a gunfight.

The Smell-o-Vision technology never worked well – the different smells mixed together and some parts of the theater were flooded with smells while others received none at all.

But Hollywood was onto something, according to Judith Amores, a researcher at Massachusetts General Hospital and Harvard Medical School. His work focuses on smell and virtual reality.

“People don’t really appreciate the sense of smell,” she said. “It’s actually so important, it’s so unexplored and it’s so powerful.”

Amores says smell also helps us create memories. And for virtual reality to look like reality, it needs smell.

“Your grandmother’s scent, or someone’s particular scent — I think those are very, very powerful,” Amores said. “It’s not the same as seeing the picture.”

Replicating real-world scents with chemicals in a lab is extremely difficult, but it’s this work that Wisniewski loves.

Wisniewski grew up in Hinesburg, Vermont, and began his career as a chef and sommelier, before moving into the flavor and fragrance industry. He is passionate about the art of identifying scents and reconstituting them in the laboratory.

“It’s very interesting for me scientifically but also psychologically, because smell has such a big impact on consumer behavior,” he said.

Not every scent in a virtual reality experience will be as pleasant as a rose, said Sarah Socia, vice president of fragrance at OVR. On a recent day at the lab, she filled small vials with clear, pungent liquids and warned visitors not to smell.

She pointed out the different scents she was working with that day: urine, garbage, diesel fuel, gunpowder, blood, dirt, and feces.

These bad smells can be used in training simulations for soldiers or first responders. For example, a firefighter-in-training can undergo training in which they fight their way through a burning building in virtual reality while smelling “virtual” smoke.

“When that happens in real life, we have the type of muscle memory to react appropriately,” Wisniewski said of this training model. “We also have that kind of emotional and psychological memory, so we don’t get overwhelmed by that.”

On the other end of the scent spectrum, positive scents can help people find an elusive sense of calm. OVR Technology is working on a program called Inhale, in which users explore a beach or forest in virtual reality while inhaling soothing nature-based scents and listening to guided meditation.

Inhale is currently used at a handful of drug addiction clinics for people in drug addiction, including River Rock Treatment Facility in Burlington.

“It’s a way to increase mindful activity with a different modality,” said Jae Bowman, co-founder and director of River Rock. “The most common response we get is, ‘It’s fun, it’s enjoyable, it’s a way to get out of my daily grind and just be present with this script.'”

OVR only contracts directly with companies like these clinics, not with individuals, at least for now. A spokesperson for the OVR declined to share the price of the product.

We know there is a lot of commercial interest in virtual reality as a whole. According to an industry analysis by PriceWaterhouseCoopers, virtual and augmented reality currently represents more than $46 billion in the global economy. This is expected to climb to $1.5 trillion by 2030.

Wisniewski and his team aim to claim a slice of that pie.

“We hope that one day, you know, VR headsets and [augmented reality] glasses are as common as our smartphones, our technology will be integrated into them in the same way that audio technology is implemented in all of these devices,” he said.

To truly experience the metaverse, Wisniewski thinks, it is not enough to see or hear it. You also have to feel it.

This story is a production of the New England News Collaborative. It was originally published by Vermont Public Radio.