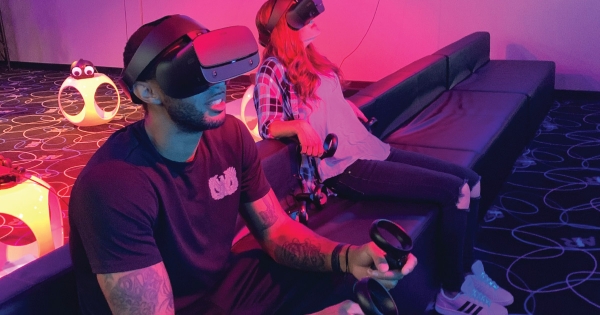 Following Facebook’s announcement of its name change to Meta to delve into the online world of the Metaverse last year, many misconceptions have emerged around the actual experience of virtual reality in the 21st century.

But with multiple options to try out the latest technology yourself, in person, right here in West Michigan, there’s never been a better time to expand your horizons into another dimension.

“People seem to think virtual reality is just games and only for kids,” said Greg Wander, owner, president and director of Amped Virtual Reality in Grand Rapids. Review. “A lot of times adult women don’t even try, but when they do, they end up laughing and having a great time. The mothers who end up participating with their families never regret it.

Offering approximately 40 different experiences, Amped has become the go-to virtual reality destination in Grand Rapids. Opened in 2019, the company offers many familiar games such as ‘Beat Saber’, ‘Fruit Ninja’ and ‘Spider-Man’, as well as new options such as ‘BBC Home’, ‘Nevrosa: Escape’ and ‘Kitten’. D”. ”

“We have many experiences that appeal to adults, like going under the ocean to be with various sea creatures, going on a spacewalk, being in a virtual escape room, creating 3D art by drawing with light, rock climbing, reliving going to the moon and visits to cultural places,” Wander said.

Part of the Amped experience includes their haptic vests, which allow players to actually feel games and experiences, similar to how virtual reality was portrayed in the 2018 film “Ready Player One”.

“Virtual reality is a great new unique experience when adults are looking for something to do on a Friday or Saturday night,” Wander said. “Amped Reality is a great place to come because people can do so much with their friends in one place: roller coasters, spooky experiences, escape rooms, shooters, and more.”

“Last year we started offering spooky experiences during Halloween and people loved it,” Wander said. “We’re cheaper than a haunted house and tours can be timed so customers don’t have to wait in line. Also, people don’t have to worry about being hit. Our most well-known spooky attraction is the “Five Nights at Freddy’s” series of games, but we have others that have literally had people screaming.”

Over the summer, Amped also offered STEM summer camps and community education, bringing kids to virtual reality, as well as teaching them about 3D printing, robotics, and some coding.

A hands-on experience from start to finish, the staff at Amped want people of all ages and experience levels to know they’re there every step of the way to make their VR experience as fun and enjoyable as possible.

“With VR it’s one thing when you see it on videos, but it’s completely different once you have the headset on,” Wander said.

“What Free Roam means is we have a 2000 square foot arena where you walk in with a backpack, and your visor, headphones and a controller, and then you can roam, as it says,” Alex Brock, COO of Zero Latency Holland, said. “You can walk around in this space, untethered, and you’re open to this arena, and open to this world that you enter into the VR space.”

Able to see other players in the game, the experience includes proximity sensors if participants get too close to walls or each other, as the game helps guide them to the next level of total immersion in reality Virtual.

“When you think VR, what comes to mind is Oculus, or now it’s Meta Quest,” Brock said. “So it’s your typical VR experience at home. Either you’re tethered to a game console or a computer or you’re in a little square. So even though the VR experience with those is really cool and a lot of fun, the immersion isn’t what we want it to be, it’s not as deep as we’d like, so Free Roam VR goes one step further.

Additionally, the center has virtual mini-golf, as well as its own 401cr full-motion racing simulator.

“These are used for racing teams,” Brock said of the hyper-realistic simulator experience. “They use them to train their drivers because the maintenance costs are less than driving a complete vehicle on a track. »

Offering both Grand Prix and off-road racing titles, and working on the development of a roller coaster simulator and other experiences, the simulators are one-of-a-kind experiences only available there.

Zero Latency has a policy that players are 12 and older, with minors to be accompanied by an adult for safety reasons, but they are excited to share their new and unique experiences with everyone as the game nears. fall and winter, with racing leagues, memberships and other options adding to the community aspects of the VR experience.

“We have a wide range of people coming in, and everyone walks out of there with a big smile on their face and the thought of ‘What did I just go through, that was amazing,'” Brock said. “It’s just such an amazing thing that it’s hard to really explain it unless you experience it yourself.”