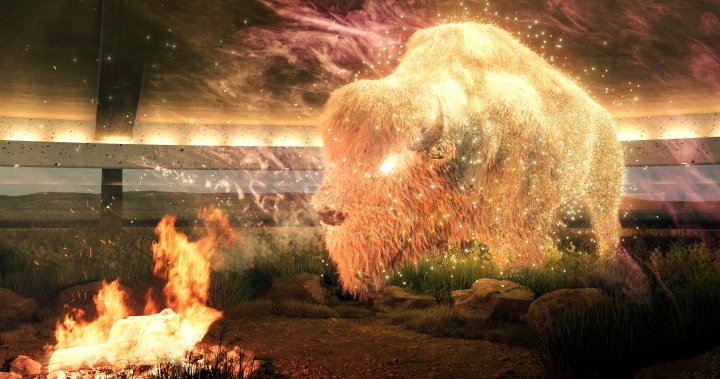 This is not a ceremony is a National Film Board of Canada VR experience directed by Ahnahktsipiitaa (Colin Van Loon), from the Piikani Nation in Alberta who now live on Westbank First Nation land.

“Going to Sundance has been a lifelong dream,” Ahnahktsipiitaa said.

The experimental documentary immerses audiences in the story through stunning cutscenes.

“In many Indigenous nations, including the Blackfoot Confederacy and the Piikani Nation, we have a tradition of witnessing where the witness becomes accountable to the community,” Ahnahktsipiitaa said.

“I really wanted to take that idea and infuse it into this piece.”

The story continues under the ad

The stories of two Aboriginal men are shared; Adam North Peigan who is president of the Sixties Scoop Indigenous Society of Alberta and a victim of The Sixties Scoop and his travels as an adopted child, and Brian Sinclair, who died at the Winnipeg Health Sciences Center on September 21, 2008.

“When you just look at Brian Sinclair’s story, you say, ‘How does this happen? “How does a man die of a bladder infection that is completely treatable in hospital after 34 hours?” so you wonder how it happens, but you also of course think it happened because as Indigenous people we know the stories too well,” Ahnahktsipiitaa said.

The buffalo spirit, Inii, also guides viewers through the story.

The story continues under the ad

This is not a ceremony screens at the Sundance Film Festival virtually on January 20 and will be available until January 30. For more information, visit www.festival.sundance.org