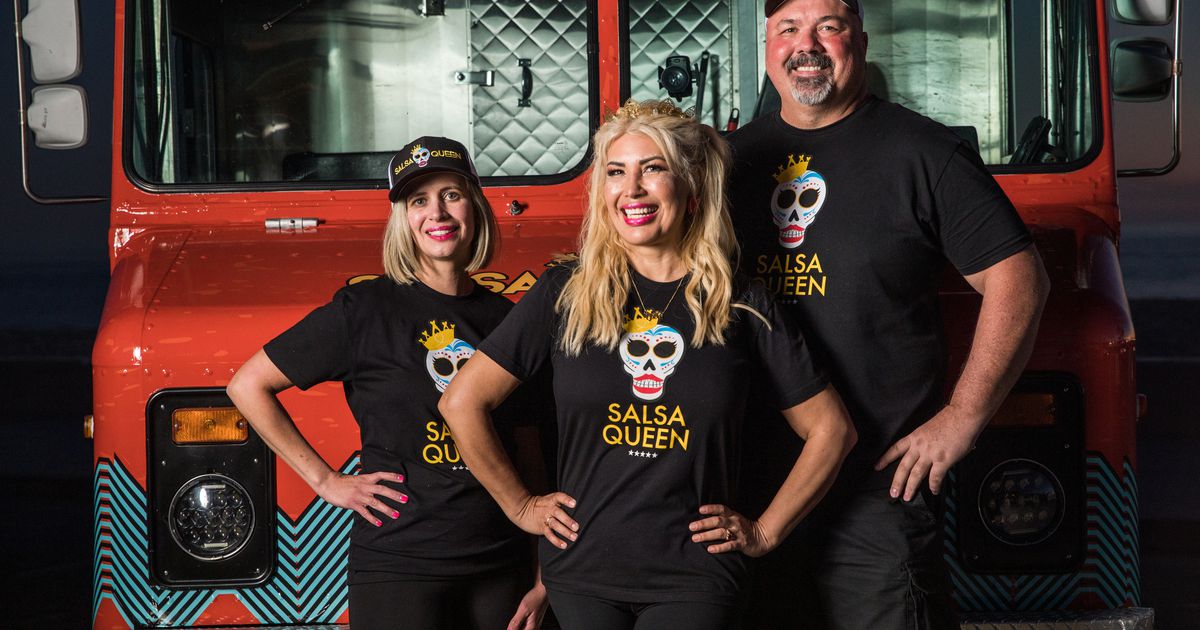 Missy Workman, SalsaQueen Zapata and Jim Birch, representing the Salsa Queen of Utah, will compete in Season 15 of Food Network’s “The Great Food Truck Race.” The season premiere is scheduled for Sunday, June 5, 2022.

When Maharba Zapata received her citizenship in 2019, she legally changed her name to SalsaQueen — a recognizable name for those who live in Utah and love top-notch salsa.

On June 5, Zapata and her husband Jim Birch will make their reality TV debut, on Season 15 of Food Network’s “The Great Food Truck Race.”

“I do a lot of local TV here in Salt Lake City, but it’s a totally different experience,” Zapata said.

Waiting to find out if the truck was picked for the show, Zapata said, “was a two-month ordeal, where you bite your nails and wait for the call to see if you’re going to make it or not. … Two months, it’s not very long, but when you’re expecting something exciting — yeah, it’s long enough!

When they got that call, she said, “We were super, super excited. Of course, we didn’t have much time between when they spoke [to us] when we had to leave. So we pretty much had everything ready just in case – the utensils we’ll need, the recipes, things like that.

The show – which Entertainment Weekly once described as “a cross between ‘Cannonball Run’ and ‘Top Chef’” – features food truck crews that travel to different cities. Teams are given a cooking challenge and then try the resulting dish on local people. It’s hosted by Tyler Florence, owner and executive chef of the Bay Area Wayfare Tavern, and host of several shows for Food Network.

This season takes place on the Southern California coast and features eight other food truck teams from across the country, all vying for a grand prize of $50,000. In the first episode, which takes place in Laguna Beach, Florence challenged the teams to cook a really hot dish.

“They had all kinds of chili peppers,” Zapata said. “They had jalapenos, they had serranos, they had poblanos and they had a habanero pepper, and nobody went for the habanero. Everyone went to get the other peppers. I think everyone was too intimidated to create a dish with a habanero. So what Tyler did was take a little spin on that – whichever team picks the habanero gets an extra hundred dollars for the starting money. And of course everyone wants the starting money, so I think everyone went and did it. One of our team members did the “Battle of the Habanero” for the team. So it was really fun.

The show is fun, but it’s also grueling. Zapata recalled that they were so tired before shooting the first day that they forgot their main ingredient: lemons.

“We had to band together, rethink and create something without our main ingredient,” Zapata said. “And it was very difficult. But we managed to pull it off very well. »

Cooking with peppers was less of a challenge for Zapata than cooking without lemons – but thinking about equipment and ingredients for a reality TV show definitely blew her mind. Zapata said her team needed to simplify recipes once they started cooking and get rid of kitchen utensils they couldn’t use. She originally planned to use slow cookers to keep meats and sauces warm, but eventually scrapped that idea.

“You have a generator, and you can’t get that much power from the generator,” Birch said.

It’s a bit ironic that Salsa Queen is on a food truck show because the brand, which can be found in nearly every grocery store in Utah, doesn’t operate a food truck in its home country. .

“When we started Salsa Queen eight years ago, we started looking at food trucks,” Birch said. “We ended up not going that route because they’re quite expensive – $50,000 for a single used one. We ended up not going that route, so it was an interesting opportunity for us. The food truck was loaned out during the show, and it gives you a chance to experience it firsthand and know what it’s like.

Zapata and Birch realized they kind of knew what it was – because it was kind of like a similar experience they had for years: getting up at 5 a.m. to go to the market for farmers to sell salsa, then tear everything down and pack up at 6 or 7 in the evening.

“It was also a lot of work,” Birch said. “So I would say we don’t have any immediate plans for a food truck!”

“The Great Food Truck Race” premieres Sunday, June 5; at 7 or 10 p.m. Mountain Time (depending on whether your provider has the Eastern or Pacific stream), and streaming on Discovery+. The series runs for eight episodes, with the finale scheduled for Sunday, July 24.