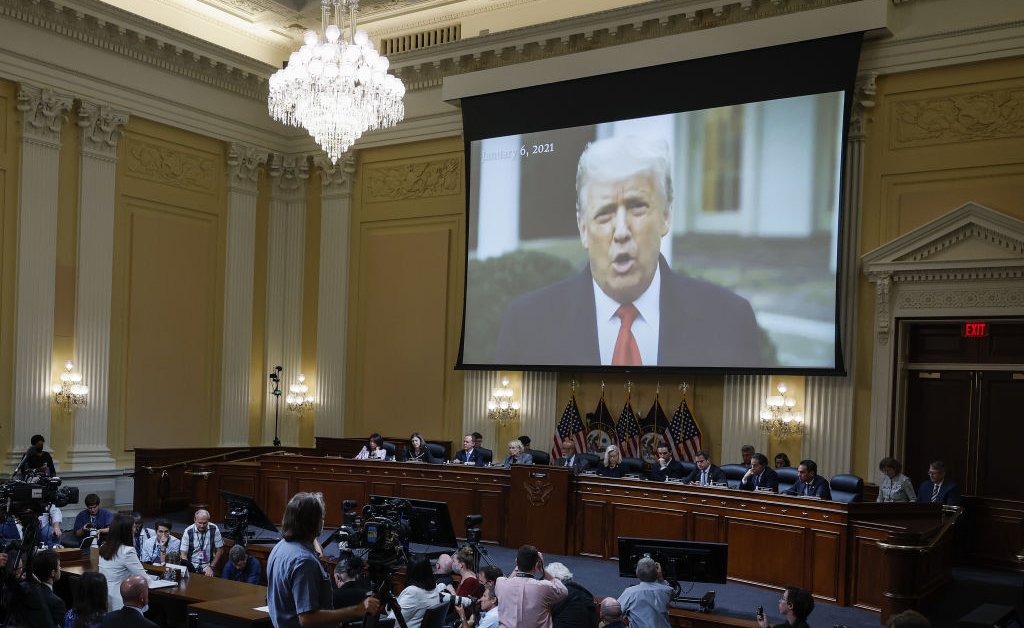 This article is part of The DC Brief, TIME’s political bulletin. Register here to get stories like this delivered to your inbox.

No one can accuse Tuesday’s episode of DC’s favorite show of being easy watching or bad television.

There was the story of ketchup splattered on the wall of the West Wing’s private dining room, the presumed result of another raging meal. A president rushing behind the wheel of one of the most heavily armored vehicles in the hemisphere. At best, indifference to arms control on the part of the Commander-in-Chief, who urged the Secret Service to unplug the magnetometers so that a stream of armed allies could fill the empty slots for the cameras. And at the center of it all: an arrogance emanating from President Donald Trump, who viewed the events of January 6, 2021 as things to be staged, framed for the cameras and in service of his big lie that he had won the 2020 election. .

But there’s a corollary to this TV mindset: ownership of the control room isn’t permanent, and the next production team can crop, recast, and reshoot. And that is precisely what the panel investigating the January 6 crisis did on Tuesday with the heartbreaking testimony of Cassidy Hutchinson. Former Senior Assistant to White House Chief of Staff Mark Meadows calmly and credibly described the events that unfolded in Trump’s orbit that day and in the days leading up to it. With a high level of detail and precision, Hutchinson made it clear that Trump seemed to know that the crowd gathered for his fabulous speech on voter fraud and undemocratic notions was armed, that he desperately wanted to lead the group to Capitol Hill, that he was to disregard the advice of his overwhelmed senior aides. The public also now knows that Trump’s allies seem quite comfortable tampering with witnesses.

In short, it was the most transparent account of Trump’s tolerance for violence, if not his appetite for violence, in his West Wing. It even left the former president’s apologists openly concerned about his reported behavior. It also served as a reminder that Trump may have taught DC a thing or two about how to properly turn a fun government hearing into something rivaling a Housewives marathon.

Trump of all people knows that even the most carefully considered ideas can unravel once the cameras start rolling. That’s why the most important place for any reality show is the casting couch, whether it’s a celebrity pageant or a Cabinet. Trump may not have intended his plot to turn into a violent melee on Capitol Hill, but the testimony at this point certainly suggests he was aware of the elements he had recruited. When what was billed as a televised rally to ‘stop the theft’ and pressure Congress not to certify Joe Biden’s victory began to spin in circles, it was clear that Trump was not no longer in the producer’s chair. He couldn’t even get his Secret Service detail to transport him to the next shoot, this one at the Capitol. The production took on a life of its own, and Trump seemed happy — to borrow an old Bravo marketing phrase — to “watch what’s going on.”

For the investigating panel, Tuesday was just the latest episode of must-watch television, a rewrite of how most congressional committees conduct hearings. The typical playbook is an alternate chance for both sides to have their members use their limited time to go through multiple versions of the same question, a boring process that often reveals little new information. The Jan. 6 committee, however, smartly chose one or two members to handle the issues at each hearing, and those members generally stick to prepared scripts. Unlike the usual hearings, there were no fishing expeditions; Because Hutchinson and those before her participated in private interviews and depositions before testifying in public, there were few surprises for lawmakers in the know. They had ready-made evidence, and the investigators had carefully paced the questions and the narrative.

Hearings may change little mind about what happened on Jan. 6 and who, if anything, deserves accountability. Polls show a sharp split by party, and television audiences lean towards the Democrats. True Trump believers will not be swayed by people like Hutchinson; they still think Trump should be sitting in the White House and that Biden has been installed incorrectly.

Yet the committee’s public service is matched only by its ability to carefully curate a series of historical accounts. Lawmakers have cleverly used previews and teasers to keep audiences tuned in and stay there. For example, lawmakers suggested on June 9 in their first public hearing that some Republicans had asked Trump for forgiveness, but officials waited until June 23 to name names. They scheduled a surprise hearing for Tuesday, but did not announce Hutchinson’s name to accompany him, adding to the who-dunnit Your. And the lawmakers on the committee passed a stay tuned posture as it appears on cable news teasing seemingly new revelations daily. They may be laying the groundwork to sue Trump, but they’re not above adopting his Apprentice– sophisticated tactics to keep the audience coming back.

Trump drove stardom and reality TV to the White House in 2016. His four years in the presidency were a daily affront of breaking news, feigned outrage and shocking rhetoric. It was the Reality Show presidency, and it was nearly impossible to look away. It was as if the Congressional Budget Office and the Kardashians were staging the most unlikely of collaborations.

Then voters canceled Trump’s show, but not before some savvy members of Congress saw the value of the writers’ room approach to government. This is why the January 6 committee was so effective: it is illuminating and considered in equal measure. Unlike the Trump presidency, this is not an exercise in vamping or an experiment left to chance. There’s a story arc, the characters are brought on stage, and the villain is pretty clearly defined, and mostly by the Republicans. The only cliffhanger is whether there will be any consequences for Trump, or if he’s able to renew for another season, starting the reboot in time for the 2024 sweeps.

Make sense of what matters in Washington. Sign up for the DC Brief newsletter.