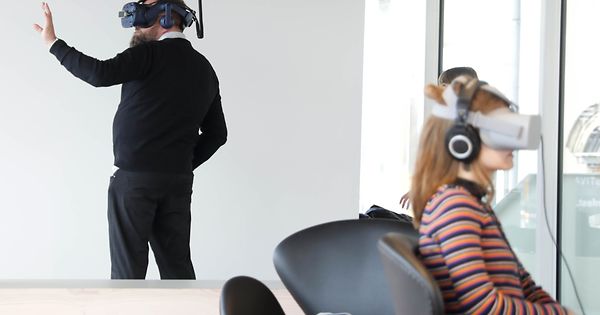 The immersive experience in the world of virtual reality

The days of confinement may be behind us but a virtual reality film, part of a 10-day exhibition in Luxembourg, brings this reality back.

After entering the virtual reality pavilion in Neimënster, I put on a headset and entered a neat and well-appointed room, where I sat alone.

I heard voices, all talking over each other – some discussing politics, others just general conversation, which reminded me of everything I heard and read at the start of the pandemic via the news and social networks. In a strange way, the voices, which have constantly accompanied me along the journey created by directors Markiewicz and Piron, have helped me to accept this confinement and to be creative in finding ways to make peace with it.

Objects in the room started falling to the floor and it felt like my world was starting to fall apart. The memories of being confined in a space resurface during this film entitled Metamorphosis.

And that’s when the movie took me into the woods, realistically looking like a forest that might be close to my neighborhood that I’ve never bothered to enter in times of non-pandemic. It reminded me of the time when I suddenly started a new activity – going hiking or observing the nature around me.

Although, as the artists said, “this is a broken visual made up of various images that come together to give meaning to your journey”, that is what the viewer experiences through this journey in the unknown, which made us compromise and reflect.

The pavilion contains a selection of 10 immersive works in virtual reality, some of which have been presented at the most eminent festivals in the world, including The end of the night by David Adler and Overview by Benjamin Cleary and Michael O’Connor, winner of the Venice Biennale. The Book of Distances by Randall Okita and We are at home by Michelle and Uri Kranot, were part of the official selection of the Tribeca Festival.

In addition to virtual reality projects, the pavilion also includes a space dedicated to VR cinema which projects a selection of award-winning 360° films, from rotating chairs.

At the end of the 10-day event, which begins March 3, viewers can rent a VR headset for €20 for two to three days.

The Luxembourg City Film Festival has also appointed an international jury for a competition dedicated to immersive works, which will award a prize of €4,000 to the best VR work.

See trailers for VR projects here. the the pavilion is open until March 13.