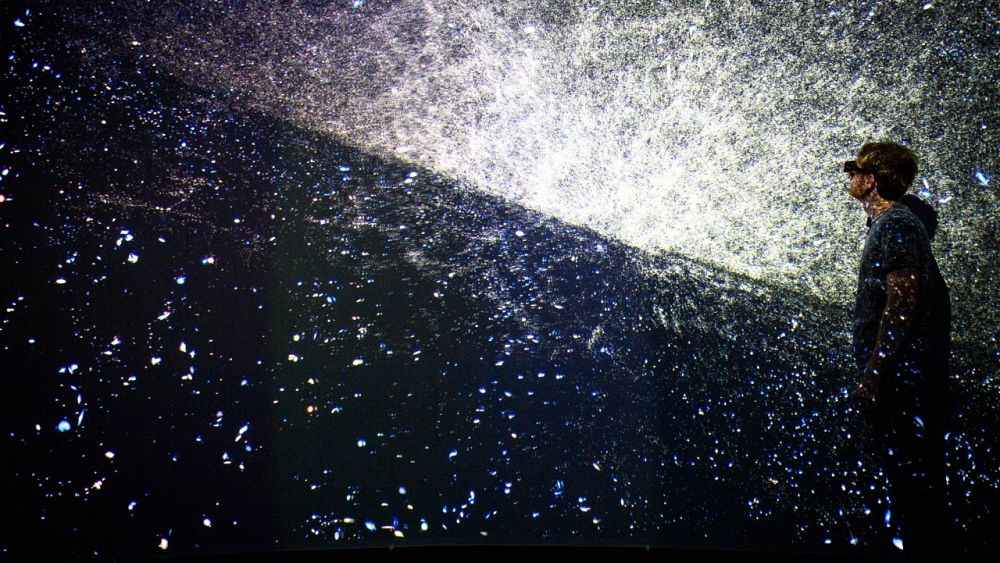 Imagine this: you are floating in space and looking at the Earth. On your right, you can see the International Space Station in orbit, which currently houses French astronaut Thomas Pesquet and his colleagues.

On your left, the moon and the vast vastness of the universe stretches out into the distance.

No, it’s not a dream. This is the start of a journey into space, thanks to a program developed by researchers from one of the best universities in Switzerland: the VIRUP software.

How to visualize the universe at different scales?

It is the result of several types of research, carried out by software engineers, astrophysicists and experts in experimental museology at Federal Polytechnic School of Lausanne (EPFL), in Swiss.

They’ve put together what they call the largest dataset in the universe to create three-dimensional panoramic visualizations of space.

In short, their 3D model is a kind of Google Earth but for the universe.

“So what we see here is a representation of the universe which was obtained thanks to a gigantic digital recording”, explained the astrophysicist Yves Revaz.

â€œIndeed, thanks to computers, we are able to reproduce the evolution over a long period of time of a portion of the universe which allows us to understand how matter is distributed all around the universeâ€.

The virtual map can be viewed through individual VR equipment, immersion systems such as panoramic cinemas with 3D glasses, dome screens or simply on a PC for two-dimensional viewing.

The images produced by the algorithms can appear from 1 m or almost to infinity.

The multisensory experimentation project has two stated objectives: to be able to visualize the universe at different scales and to attract a wide range of visitors, from scientists to amateurs.

Astronomers and astrophysicists have been collecting data on billions of celestial objects for decades with telescopes on Earth and in space.

In order to get visual representations of tens of terabytes of data sets, Revaz and software engineer Florian Cabot rendered the data at 90 frames per second, like a movie.

â€œViewing astrophysical data is much more accessible than viewing graphs and numbers, it helps develop an intuition of complex phenomena,â€ Revaz said.

“VIRUP is precisely a way to make all of our astrophysical data accessible to everyone, and this will become even more important as we build larger telescopes like the Square Kilometer Array which will generate huge amounts of data.”

The project can visualize the data of eight databases grouped together, among which the Sloan Digital Sky Poll, which consists of over 50 million galaxies and 300 million objects in general.

He also based his research on data from the Open the catalog of exoplanets, which aggregates various data sources on exoplanets.

The biggest challenge VIRUP has to overcome is related to its storage capacity: still a work in progress for now, the beta cannot be run on a Mac – and it needs a lot of internal storage to run on it. a PC.

A tool for other industries?

According to Jean-Paul Kneib, director of the Laboratory of Astrophysics at EPFL, this educational visualization model could be applied to other industries.

“If we want to look inside our brain, if we want to go and see what’s going on in the Tokamaks for fusion. We have developed a 3D visualization tool that can really be of benefit to many areas of science,” he said. said Kneib.

Even if VR games and representations of universes already exist, the EPFL team affirms that VIRUP goes much further and broader since it brings together these vast datasets containing hundreds of millions of space objects in a â€œone-stop-shop solutionâ€.

â€œActually, we actually started this project because I was working on a three-dimensional mapping project of the universe and was still a little frustrated with the 2D visualization on my screen, which didn’t have a lot of meaning, “Kneib told AFP.