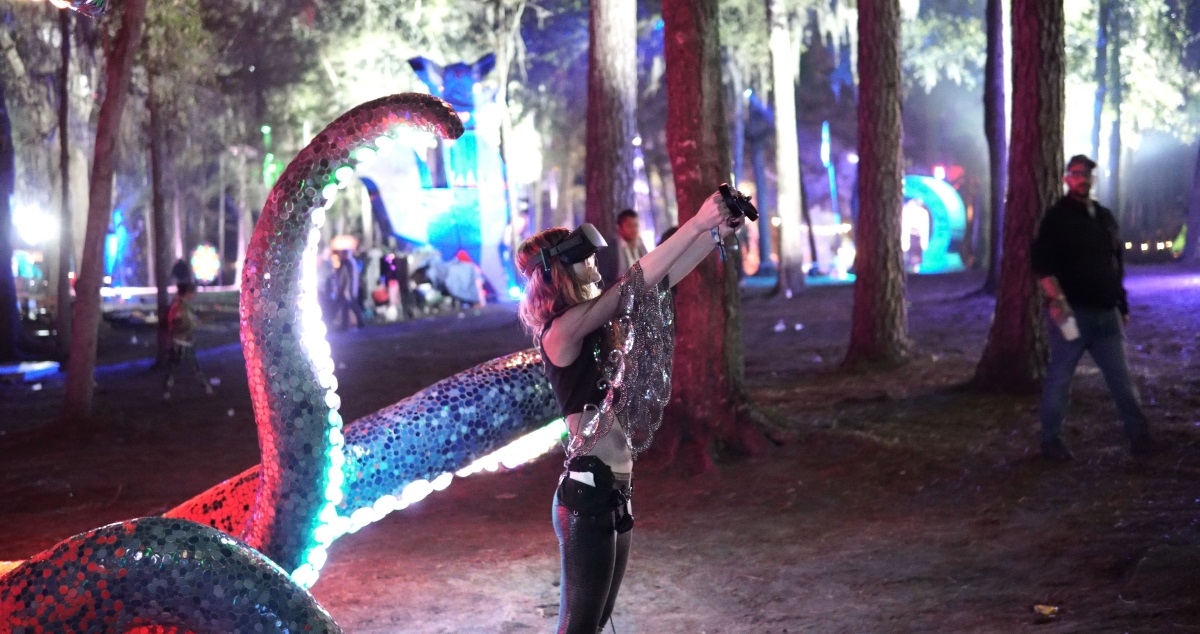 After successful installation at Burning man, Soundscape VR, created by Groove Science Studios, Inc., brought its cutting-edge VR music experience to Florida and dazzled festival-goers as they entered a surreal, interactive and explorable virtual world of music and light. Live music was streamed simultaneously to the audio-responsive VR worlds and the on-stage sound system, as gamers created the visual experience for spectators via 120-inch projection screens.

Over the three days of the festival, thousands of Hulaween attendees had the opportunity to experience the first virtual reality activation of its kind. Consistent lines of people waiting for the chance to enter the Soundscape VR world were a regular sight; dance, laugh and enjoy the community of fellow festival-goers as they cheered on their friends’ protests projected on the big screen. Each player seemed to take a different path to explore the world, with many eventually removing the helmet to immediately return to the back of the line for another round.

As the rhythm of the bass sent waves of light rushing through the virtual world, players took to the skies to explore their new realities; fireworks, paint and names scribbled in the sky. A world would exist deep within a moving nebula of infinite scale, following it on an icy peak bathed in the glow of the Northern Lights. As one player created a cyclone of embers inside a crystalline cave, the next launched a fire hose of light, bombarding a distant planet.

â€œWe were very happy to have the opportunity to host Soundscape VR at this year’s show.

Suwannee Hulaween Festival, â€said Andrew Carroll, producer of the festival’sâ€œ Spirit Lake â€. â€œWhat a unique and exciting experience to enter the world of Soundscape VR! Every time I stopped at the facility there were lines of people waiting to venture into this out of this world experience. Most people have never seen anything like it! Hope we can get them back next year. “

Soundscape VR started in 2013 as a vision of a new way to bring people closer to their favorite music, empowering artists and users. The company will later unveil the world’s first VR music location at Burning Man, becoming one of the most immersive art experiences of this illustrious event. The software has continued to advance as the business has grown, now launching its festival tour where fans engage in an audiovisual sound adventure synchronized between two realities; a fantastic world of light and sound beyond their wildest dreams.

â€œNo other project could be as exciting and satisfying to me as the creation of Soundscape VR. Being innovators of the next evolution in music, seeing how much love music fans have for us, inspires everything we do. Every time someone takes the helmet off and tells us what just happened is the most amazing experience of their entire life; it’s all worth it, â€says Eric Ryan Alexander, CEO and Founder of Soundscape VR.

PricewaterhouseCoopers estimates that virtual reality will generate $ 4.9 billion in revenue in 2018, up from $ 421 million in 2016, and is expected to grow to the fullest of any entertainment industry, with 68 million headsets in use by now. 2021.

Soundscape VR is preparing for this growth by expanding the singular use of the past by consumers and has added the ability of musicians and production companies to use Soundscape VR as a means to perform simultaneously in the real and virtual world through performances. synchronized. On December 20, Groove Science Studios will launch a free expansion to Soundscape VR adding private and public social VR worlds, a new multiplayer rhythm game, a redesigned interface, and a suite of other improvements.

Watch the Soundscape VR Hulaween aftermovie to see the installation in action here.

Photos of the experience are available here.

Soundscape VR is the most advanced VR music experience on the market, operating as the premier destination for virtual reality music and art content. Anyone can have a mind-blowing audiovisual experience from the comfort and convenience of their own home – making Soundscape one of the most immersive and technically impressive virtual reality apps in the world. Users elevate artists’ visions through a collaboration that creates bespoke VR worlds to match any music, creating entirely original and new visual experiences and delivering their content worldwide on the Soundscape VR platform. which can best be described as a 24/7 music festival. With over 30,000 users currently, Soundscape VR is featured on Oculus Home and Steam as a free download for the Oculus Rift and HTC Vive platforms. For news on exciting partnerships with amazing musicians, festivals and production companies, and to learn more about the VR experience, visit https://www.playsoundscapevr.com/

Share the article on social media or by email: