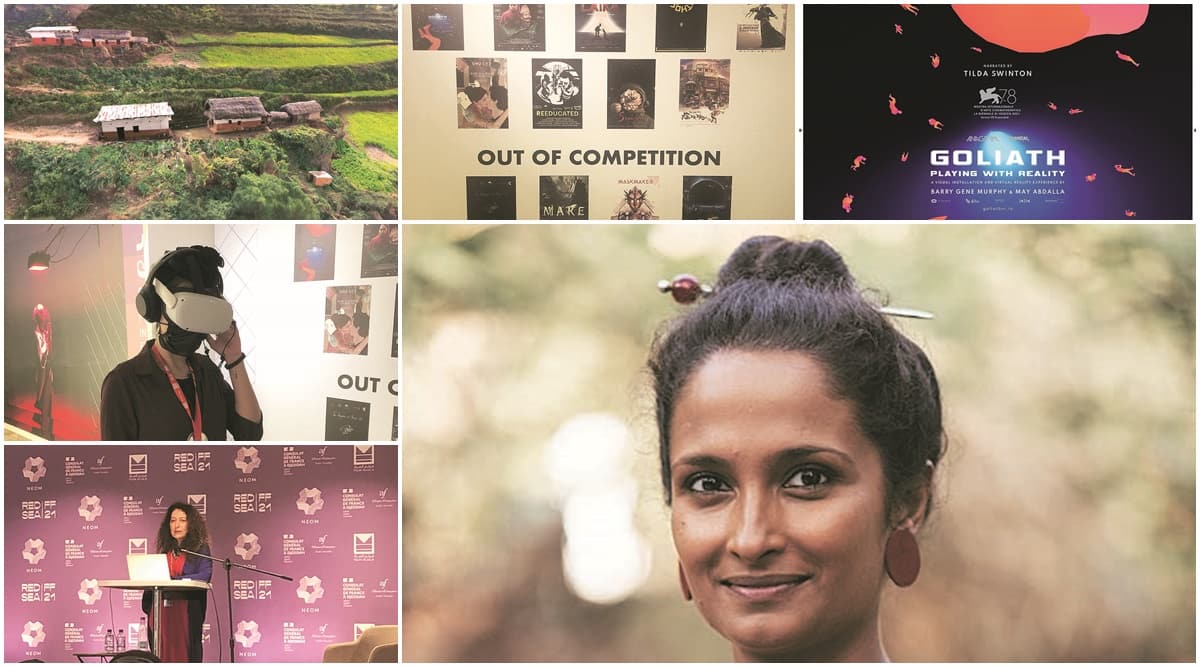 A set of immaculate booths displaying posters on their elegantly constructed panels welcome visitors to Hayy Jameel, an arts complex and creative hub in the historic port city of Jeddah in Saudi Arabia. Hayy Jameel’s booths are the equivalent of movie theaters with a few exceptions. Each person here is given a small, dedicated movie theater that comes with a headset, headset, and controller. There are also many options to watch, unlike only one offered in a traditional theater. Welcome to the new world of virtual reality (VR) storytelling that is increasingly becoming a part of film festivals around the world.

At the inaugural edition of the International Red Sea Film Festival in Jeddah, held from December 6 to 15, 21 virtual reality works of art from around the world were presented in two separate and out-of-competition sections. . Entitled Red Sea Immersive, the festival’s VR segment represented a radical change in the festival’s programming across several continents. At least five major festivals – Venice, Sundance, South by Southwest, Tribeca and the Red Sea Festival – have added a VR category in recent years to engage audiences looking to experience art with cutting edge technology.

â€œIt is an art that is so complementary to the main festival program, but also presents itself independently as a revolutionary and boundary-pushing selection of works,â€ said the artistic director of the Red Sea Festival, Edouard Waintrop, who previously headed the management committee. Fortnight parallel programming in Cannes, around VR works in the official selection. Among the VR works competing in Jeddah are Kusunda, an interactive work on the endangered Kusunda language in Nepal, Goliath: playing with reality, the true story of a man whose parents were diagnosed with schizophrenia, and Overview, the story of a talented illustrator who has just experienced a painful break-up with his girlfriend, a graceful doe who dreams of becoming a musician.

Most of the VR works produced today are backed by international teams with enormous experience and talent. Goliath stars British actor Tilda Swinton while Welsh actor Taron Egerton, who played Elton John in Rocket man, is illustrator Herbie Turner in Overview. Overview is created by Irish director Benjamin Cleary who won the Oscar for Best Live Action Short Film for Stutterer in 2016. An all-female jury made up of avant-garde American artist Laurie Anderson, BAFTA-winner Victoria Mapplebeck, and Sarah Mohanna Al Abdali, one of Saudi Arabia’s premier street artists, will decide on the winner of 13 VR works in Jeddah.

â€œThe pandemic has generated a lot of interest in virtual reality works,â€ said Liz Rosenthal, curator of Red Sea Immersive. â€œThe selection in Jeddah is truly one of the most exciting presentations of virtual experiences to have graced the festival circuit to date,â€ adds Rosenthal, also curator of Venice VR at the Venice International Film Festival. According to a recent study, 70% of all VR users have purchased a device in the past 12 months. A whopping 10.7 million VR headsets have been sold so far this year and the number is expected to reach 70.1 million by 2025.

A VR work was part of the official selection at the Cannes Film Festival for the first time four years ago when acclaimed Mexican director Alejandro IÃ±Ã¡rritu presented his VR installation, Carne y Arena, on the plight of refugees. In a rare move, the Bird man and The ghost director received a Special Oscar for his VR work in 2017. In the same year, IÃ±Ã¡rritu showed Carne y Arena in Cannes, one of the first VR films to be shot in India, was part of the festival’s five VR film selection from Toronto, again a first. The five minutes Right to pray, directed by Khushboo Ranka and produced by Anand Gandhi, explored women’s protests against a long tradition that denied them entry to a temple in Trimbakeshwar in Maharashtra.

At Sundance in the United States in January this year, 14 VR projects were part of the festival’s New Frontier program while Venice VR Expanded, a dedicated virtual reality programming launched five years ago by the oldest festival in cinema in the world, even offers its famous Golden Lion for the best VR story. The end of the night, a Danish virtual reality work about a Dane fleeing by boat to Sweden to escape Nazi occupation, won the Golden Lion in Venice in September. The end of the night, which is part of the Red Sea Immersive Selection, has won accolades in Venice and Jeddah for its breathtaking interactive experience.

â€œThe first VR projects were demos driven by technology, not storytelling. That has changed and there is an explosion of content today. Virtual reality works today are not demos, but legitimate works of art, â€says Michael Salmon, producer of Red Sea Immersive. Today’s VR projects aren’t run by one person, but by a team of filmmakers, developers, gamers, and animators. “It’s a similar team if you develop a game, but the artistic sensibility comes with it,” adds Londoner Salmon.

“With virtual reality, it is possible for a community like the Kusunda to represent their culture and history in a spatial format”, explains Gayatri Parameswaran, co-creator of Kusunda, part of the competition section in Jeddah. “Virtual reality works are a great tool for archiving stories so that successive generations can uncover the past of their ancestors in a very special way,” adds the Berlin-based filmmaker, who was born and raised in the suburbs. from Dombivli to Mumbai.

Since the early days of virtual reality, when viewers had to insert a large cell phone into a headset to view it, the experience of virtual reality has come a long way. Today’s VR projects are visualized on Oculus Quest 2 headsets made by Facebook (Facebook, now Metaverse, bought Oculus in 2016) that provide a user-friendly experience without any distractions or disorientation. â€œToday’s VR headsets are autonomous devices that are not connected to a computer as before,â€ explains Marc Lopato, co-founder of Diversion Cinema, a virtual reality event agency located in Paris. Thanks to the revolutionary technology available today, more and more film festivals are presenting VR projects as part of their official selection.

Financial Express is now on Telegram. Click here to join our channel and stay up to date with the latest news and updates from Biz.