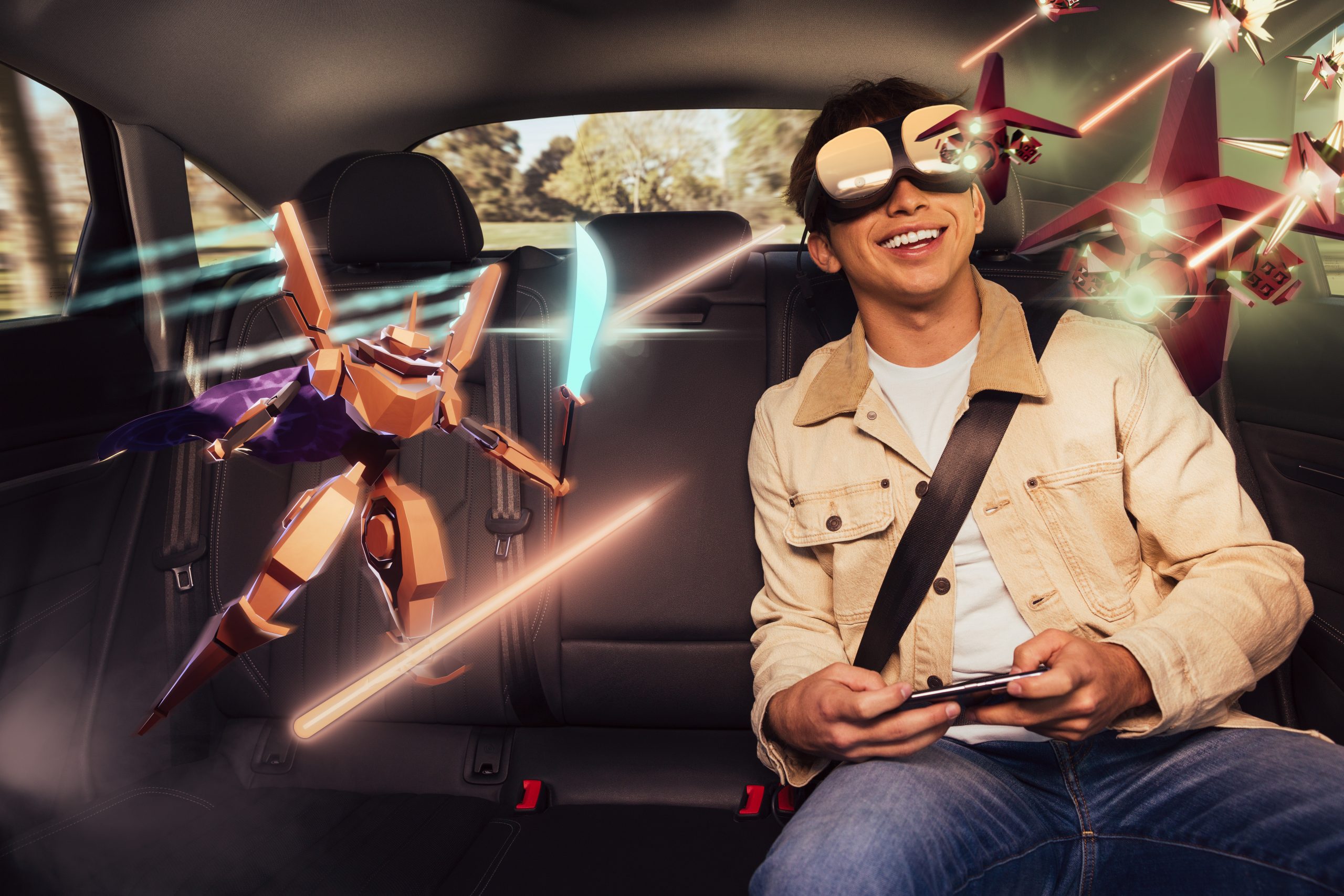 German start-up Holoride enables synchronous VR experiences while driving in the back seat of a car. With the aid of HTC Vive Flowyou can enjoy VR games, VR apps and other content that reacts to car movements while driving.

VR in the car: virtual reality synchronized with movement

To immerse rear passengers in virtual worlds, Holoride uses a multimedia format it calls “Elastic Content”. Holoride taps into various vehicle data, such as navigation and sensor data, in real time and dynamically adapts the VR experience to it.

This creates a constantly moving virtual space, where you can see and feel curves, accelerations or decelerations in virtual reality. Besides VR games, other content like 2D movies or HTC Phone Mirroring will be available. Android smartphone screens can be mirrored in the VR headset to use mobile apps like Netflix or Disney+.

Holoride also wants to offer a browser to stream YouTube, Twitch or other websites. 2D applications are displayed on a cinema-sized virtual screen, embedded in a motion-synchronous environment. This should eliminate the symptoms of motion sickness that occur in susceptible people.

Among Us VR studio launch title

Among the VR games that will be available when Holoride launches is Cloudbreakers: Leaving Heaven. The title was developed by Schell Games, which made Among Us VR, I Expect You To Die 1 and 2, and Until You Fall.

In the shoot’em up, you control a flying robot, shoot down enemy robots and collect resources to improve yourself. The difficulty level increases as you stay alive. Studios like ARVORE, Tripp or Magnopus will also provide Holoride content in the future.

The Holoride Pioneers Pack has been available on the Holoride website since November 2 and costs 699 euros. It includes the HTC Vive Flow VR headset, an 8BitDo Pro 2 gamepad and a security strap. The latter is connected to the vehicle’s seat belt and is intended to provide protection in the event of “unforeseen events while driving”.

A one-year subscription to the Holoride platform is also included. After expiration, it can be renewed monthly for 19.99 euros each. If you register a year in advance, the cost is reduced to 14.99 euros per month. The app library will be continuously expanded in the coming months. All the content available so far can be found in the Holorid Library.

Holoride is not exclusive to Audi or HTC

Holoride will be available for selected Audi models from mid-November. These include the A4 to A8, Q5, Q7, Q8 models or the electric Audi e-tron, e-tron Sportsback and e-tron GT models.

The prerequisite is the “Audi Connect Navigation & Infotainment” equipment package with the MIB 3 infotainment system and a tested chassis. However, they must not have selected “Remote Parking Assist Plus”.

Holoride plans to launch in the United States in early 2023 and in other European and Asian markets later this year. Although Audi owns shares in Holoride, the platform will also be available for models from other manufacturers in the future. The collaboration with HTC is also not exclusive, so it might be possible to use Holoride with other VR headsets in the future.

Note: Links to online stores in articles may be so-called affiliate links. If you buy through this link, MIXED receives a commission from the supplier. For you, the price does not change.