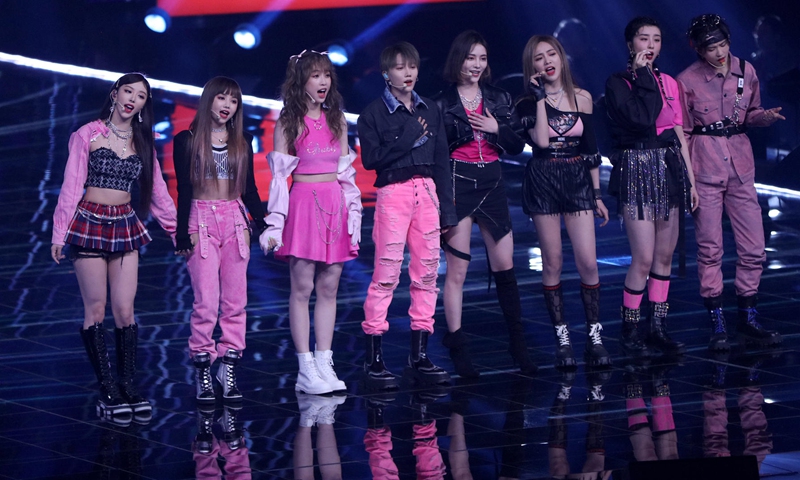 The nine members of the Chinese girl group THE9, who were selected at the 2020 Chinese survival show Youth with you 2 starring South Korean idol Lisa, hosted a special concert Friday and Saturday that used Extended Reality (XR) technology to present a stunning scene to the audience.

Over 40,000 tickets for the event were sold within minutes, due to the popularity of the girl group as well as advanced technology adding special effects to the stage performance.

The concerts used XR technology to merge real performers and a virtual backdrop, taking the different stories of THE9 members to build virtual cities for the nine singers, according to Shanghai-based outlet The Paper.

Through elements such as a colorful rainforest, giant puppets, and thorn-covered mechanical feathers, the stories of the nine young women who dared to challenge themselves were presented on the futuristic stage.

Through the use of XR, THE9 performed on what appeared to be various city blocks, each created in different art styles. At the same time, the audience could move around the city, jumping between virtual and reality.

Watching the talks on Sina Weibo in China, most of the concert goers were happy with the presentation, which was sort of an experience in China.

The hashtag associated with the concerts generated more than 400 million views on Sina Weibo on Monday.

â€œThe stage accentuated Liu Yuxin’s performance. She sang and danced among the ruins of a city, which impressed me a lot,â€ a Chinese fan of band member Liu Yuxin told the Global Times on Monday. watched the concert live on iQIYI.

The concerts even gave viewers a chance to “witness” in real life. After purchasing tickets, users could create avatars that were uploaded to screens on the spot.

The Paper report states that the production team behind the event spent more than six months preparing for the concert online.

â€œOnline concerts are fundamentally a content business and only high quality content can attract paying users and ultimately improve the sustainability of the music industry,â€ said Fan Zhihui, music industry analyst, to the Global Times.