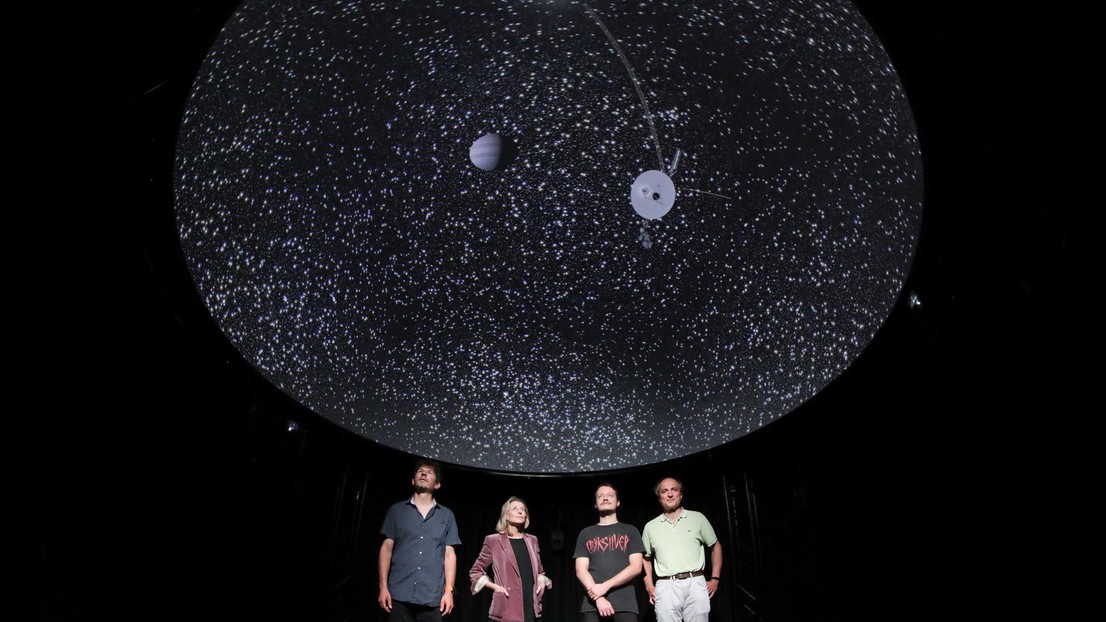 Have you ever wanted to explore outer space? Now you can, without leaving Earth, thanks to the powerful open source beta software VIRUP which builds – in real time – a virtual universe based on the most detailed contemporary astrophysical and cosmological data.

Read the long version of this article.

You are floating in space, just above the Earth. The International Space Station is at an arm’s length. You turn your head to see the moon, a small circle, in the distance. You can’t help but think that this is probably what an astronaut would see on a spacewalk.

It is the start of a journey into space, in a virtual environment developed by scientists from EPFL.

Now, for the very first time, you can enter the most complete virtual universe based on the latest astrophysical and cosmological data, thanks to powerful open source software developed at EPFL’s Laboratory of Astrophysics (LASTRO). The software is called VIRUP, for Virtual Reality Universe Project, and a first beta version is released today.

â€œYou can navigate through the most detailed map of the universe from the comfort of your own home,â€ explains Jean-Paul Kneib, director of LASTRO. â€œThis is the opportunity to travel in space, in time and to discover the universe.

The VIRUP challenge: visualize terabytes of data at a time

Astronomers and astrophysicists collect data on billions of celestial objects in the night sky using telescopes here on Earth and in space. There are already decades of observational data. Even larger amounts of data are expected in the near future.

In order to obtain visual representations of large amounts of data, such as a movie, it is common practice to pre-render specific sequences. But what about creating a visual representation of the data in real time, as if you were there, an observer at an arbitrary point in space and time? That’s what LASTRO astrophysicist Yves Revaz set out to do with VIRUP, with the help of LASTRO software engineer Florian Cabot, and it meant rendering terabytes of data at 90 frames per second. This last constraint is imposed by the virtual reality environment, for a totally immersive and fluid experience.

â€œViewing astrophysical data is much more accessible than viewing graphs and figures, it helps develop intuition of complex phenomenaâ€, explains Revaz. â€œVIRUP is precisely a way to make all of our astrophysical data accessible to everyone, and this will become even more important as we build larger telescopes like the Square Kilometer Array that will generate huge amounts of data. “

Astrophysical and cosmological data and simulations

For the moment, VIRUP can already visualize the data of more than 8 combined databases. The Sloan Digital Sky Survey includes over 50 million galaxies and 300 million objects in general. The Milky Way Gaia data consists of 1.5 billion light sources. The Planck mission involves a satellite that measures the first light in the universe after the Big Bang, called microwave cosmic background radiation. There is also the Open Catalog of Exoplanets which brings together various sources of data on exoplanets. Other databases include a directory of more than 3,000 satellites orbiting the Earth, as well as various skins and textures to render the objects.

VIRUP also renders contemporary and scientifically robust simulation data sets based on research. You can observe the Milky Way and its future collision with the Andromeda galaxy, our galactic neighbor also known as M31. You can also see huge portions of the cosmic web – the large-scale filamentous structures that stretch across the universe – appear over billions of years, based on simulations from a dataset. called IllustrisTNG which consists of 30 billion simulated particles. A major challenge is to ensure a smooth transition from one database to another.

â€œWe considered using existing graphics engines to visualize the data, but in the end, I developed one specifically for the project. It’s flexible, we can add more data as it becomes available, and it’s suitable for astronomy, â€says Cabot. â€œFor this first version of VIRUP, I focused on rendering static data, so the interaction with the data is still a bit rough and the rendering of simulations cannot yet be done in real time for example.

Of course, it is only possible to navigate in the data and simulations imported into VIRUP. You can visit the 4,500 exoplanets discovered so far, for example, but their appearance is an artist’s impression deduced from the observation. You can also navigate through the 50 million galaxies measured so far by the Sloan Digital Sky Survey, but the actual data has limited resolution and this limits the amount of detail that can be displayed in its virtual representation. That being said, there is still a huge amount of data that can be explored using VIRUP. Some of the next steps could be to include databases of objects in our solar system like all asteroids, or various other objects in the galaxy like nebulae and pulsars.

For a fully immersive, 3D, 360 experience, you would need a pair of VR glasses and a computer to run the VIRUP engine, as well as storage space to store a selection of astrophysical and cosmological data.

VIRUP is also able to build a virtual universe in other VR environments, such as a dome which is particularly useful for places like planetariums, panoramas, caves and half-caves. The transition from open software from the rather personal and isolated experience of VR glasses to the collective theatrical experience offered by domes and caves, has become possible thanks to a collaboration between LASTRO scientists and researchers from the Experimental Museology Laboratory. (eM +) from EPFL, and funded by EPFL seed funding to promote interdisciplinary projects.

â€œIt’s about data discovery. The immersive system means you can embody data, which has a profound effect on how you actually perceive data, â€says artist Sarah Kenderdine who runs eM +.

A journey through the universe – a short film

With the release of VIRUP comes a short film entitled â€œArcheology of Lightâ€, a possible journey through the virtual universe made possible thanks to open software.

The 20-minute film starts from Earth and traces a journey through the different scales of the universe, from our solar system to the Milky Way, via the cosmic web and the relic light of the Big Bang.

If you can’t wait to see the movie, you can watch it in 2D, 360 Â°, and 180 Â° stereo on YouTube. If you have access to a VR environment, you can immerse yourself in the â€œarcheology of lightâ€.

For the dome experience, the film will be presented at EPFL’s next exhibition, Cosmos Archeology: Explorations in Space and Time, which will open on April 21, 2022 in the EPFL pavilions. A preliminary version of the film was screened at the Synra Dome of the Science Museum in Tokyo in September, with support from the Swiss Embassy in Tokyo. VIRUP will be presented this month at an exhibition in Dubai as part of the EPFL Virtual Space Tour.