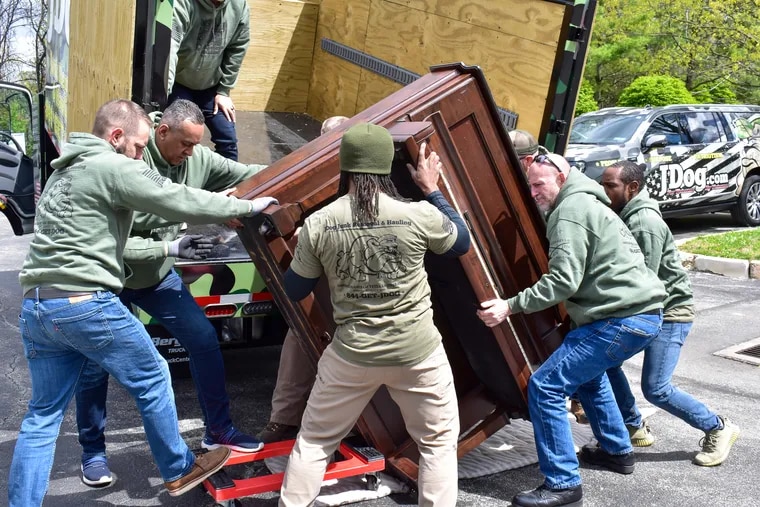 Jerry Flanagan never imagined his veteran-owned and operated dumpster business would make it to the small screen.

But it happens on Sunday, October 10, when the Discovery and American Heroes channels start airing a reality show Operation hidden treasures, produced by veteran television producer Jim Milio. Among other notable programs, Emmy-nominated Milio took part in Dog Whisperer for National Geographic, Founding fathers for the History channel, and The real Las Vegas for A&E.

“Jim Milio has heard about what we do, putting veterans in business ownership through our franchises, and how we do environmental trash removal and cleanup, instead to just put stuff in the landfill,” said Flanagan, a Philadelphia native, Army veteran and founder of JDog.

It makes television compelling – American Pickers meets Storage Wars – but with a higher purpose: JDog franchises are sold and operated by veterans of the armed forces and their families.

After one of the pandemic reopenings, filming wrapped in May. Ten episodes will air between October and December, Sundays at 8 a.m. on Discovery and Thursdays at 8:30 p.m. on the American Heroes Channel.

“It’s expected to reach up to 86 million viewers, and we hope all those eyes on JDog will help hire veterans and sell more franchises,” Flanagan said.

Two franchises – one in Lancaster, Pennsylvania, and another in Austin, Texas – appear in the series.

Founded by Flanagan and his wife, Tracy, JDog Junk Removal began with two franchises in the Philadelphia area in 2012 and has grown to over 240 active franchises nationwide. Based in Berwyn, the original company employs 17 people.

Producer Jim Milio said the company’s practice of regular donations and recycling is what intrigued him as a feel-good story.

“They donate furniture or toys to hospitals and the elderly. They don’t get paid for it. It’s on their own time. They use military values ​​whether our cameras are there or not, and it’s cool to show what they’re doing,” Milio said.

“During the pandemic, we were an essential business, so we grew tremendously during that time,” adding 80 franchises, he said. The cost of opening a new franchise includes a $45,000 franchise fee and an additional investment of $50,000 to $100,000, Flanagan said. He and his wife own 60% of the parent company, a majority stake, and outside investors, including a private equity firm, own 40% of JDog.

JDog, as a franchisor, expects $5 million in revenue this year and aims to sell an additional 80-100 new franchises next year.

The company competes with 1-800-GOT-JUNK and College Hunks, but with that veteran focus.

JDog also launched JDog Carpet Cleaning and Floor Care over the past year and has currently sold 17 of these franchises. Franchise fees total $25,000 plus an investment similar to waste removal.

Flanagan said one of the challenges the company faces is finding workers.

“It is very difficult to find employees. We and our franchisees have to pay more money per hour to attract people,” he said, adding that the average hourly wage in a JDog franchise is $13 to $18 per hour depending on the town. JDog is hiring from sources such as GI Jobs and Orion Talent. Due to the war in Afghanistan, 20,000 veterans “have been leaving the service every year for the past five years”, he said.

For returning veterans seeking contract opportunities, consult databases maintained by the National Veteran Owned Business Association (https://navoba.org/) and VetBiz.va.gov, compiled by the United States Administration. Veterans. Their websites are not comprehensive but provide a starting point.

ID cards, for veterinarians starting a business or seeking work, can be obtained from the Pennsylvania Department of Military and Veterans Affairs, www.dmva.pa.gov, and in individual counties in New Jersey.