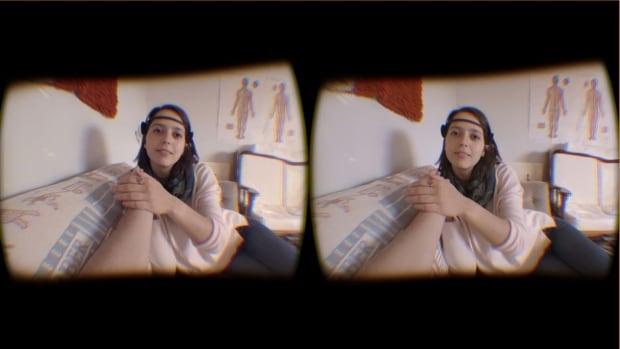 Toronto filmmaker Elli Raynai considers himself one of these, modifying virtual reality technology to make the kind of films that can really enter an audience’s mind.

A self-proclaimed “DIY micro-budget” filmmaker, the 37-year-old began exploring last year how he could harness the promise of simulated virtual reality environments for cinematic storytelling.

The problem? No reasonable tool existed for a small director to achieve this.

“It’s a whole different medium. It has different rules,” he said. “We didn’t know how to do it.”

Raynai therefore started attending VR meetups in Toronto. He met his filmmaking partner, Alexander Kondratskiy, a 26-year-old programmer. The duo quickly decided that they should build their own solutions.

â€œIt was about hacking the technology to try to get the most out of it,â€ Raynai said.

The completed short film, titled I am you, is 10 minutes long and made its debut this month at Toronto’s Kaleidoscope interactive art exploration.

It was filmed using a $ 500 Oculus Rift development kit from eBay, a bike helmet with dual GoPro cameras, and reverse-engineered gaming software.

The technical challenges of working with virtual reality were unlike any other film made by Raynai.

Even figuring out how to read “dailies” or raw, unedited footage turned out to be complicated.

â€œThe way you look at VR is through a game engine,â€ Raynai said.

â€œIt’s not something you would buy off the shelf and people could plug in and play,â€ he said. “If we couldn’t get the video playback for VR to work on our own, then the project is dead.”

To create a truly stereoscopic 3D effect, Raynai and Kondratskiy calculated an ideal “interpupillary distance” of 64 millimeters between the eyes of average users, then mounted two GoPro’s on a bicycle helmet to mimic normal human eyesight.

The two actors alternated wearing helmets to get a first-person perspective.

â€œWe attached the Oculus to the back of the helmet, and we had a PC recording basically where the Oculus was facing so we knew where the camera was looking while we were shooting the video,â€ Kondratskiy explained.

A laptop in a backpack worn by the actors tracked their head movements, feeding data from the Oculus’ “inertial measurement unit” (or IMU) to the computer.

“Look through the eyes of the characters”

“It’s pretty funny, that’s how we came up with the title I am you“said Kondratskiy.

According to the local VR community, I am you represents the first independent film in Canada written and shot exclusively for a VR head-mounted display.

“It was fantastic. I had never seen a movie like this shot in VR before,” said Stephan Tanguay, who watched the movie on an Oculus Rift at the Kaleidoscope.

“It’s a pretty big development when we talk about the cinematic language in a story and how you create a sense of immersion, as opposed to just looking at a picture.”

Tanguay, 3D game designer and virtual reality enthusiast, was particularly interested in stereoscopic effects and the depth perception that it provides to the viewer.

“It was good. Like looking through the eyes of the characters,” he said of the film, which tells the story of a young couple’s experiences with a new app that allows them to change. of conscience.

“[Virtual reality] is an experimental medium, so we’re in a very pioneering phase, where you’ll see the greatest amount of work that no one has tried before. “

I am you was shot for less than $ 3,000 in four days, but Hollywood is also convinced of the possibilities of virtual reality beyond the niche game scene.

HBO and Lion’s Gate have signed agreements to produce content for VR glasses.

The Sundance Film Festival featured a VR tent featuring documentaries and experimental specials. The Tribeca Film Festival in New York City included a Storyscapes exhibit featuring â€œimmersive creationsâ€ in virtual reality, such as a walk through a maze in the dark.

As a marketing tool, virtual reality has also been exploited by networks like Fox, which commissioned Toronto-based firm Secret Location to create a CGI “facility” allowing viewers to experience a chase of the headless horseman in the part of a promotion for the supernatural television series. Sleeping Hollow.

So far, however, Raynai and Kondratskiy don’t know of anyone who has attempted a stand-alone independent film project in Canada that tells a scripted story using virtual reality.

â€œI came from a narrative context to make a narrative story,â€ Raynai said. “I’m not a business manager. I’m a guy who tries to make movies.”

Now that their film is over, Raynai and Konrayskiy plan to host a larger premiere in June at the theaters and Videofag performance lab in Toronto. They also hope to introduce the film to programmers at Sundance, Tribeca, South by Southwest and other interactive festivals.

â€œVirtual reality is still in its infancy, but there is a lot of excitement around the content that people are creating,â€ Raynai said.

“I hope our film has a good chance of being shown.”